As it is Written: The Genesis Account Literal or Literary?

Readers come away with a better understanding of the six-day creation argument!

The framework hypothesis or literary framework view has grown in acceptance as more readers of Scripture place “science” as the authority over the interpretation of God’s Word. By re-interpreting Genesis, this view encourages Christians to disregard the plainly shared timeline of creation and instead consider it as merely figurative or poetic rather than historical and accurate. Kenneth Gentry carefully defines the framework hypothesis, while tracing its historical origins and purpose. This provides a helpful introduction both for those who know the framework hypothesis as well as any hearing the term for the first time. 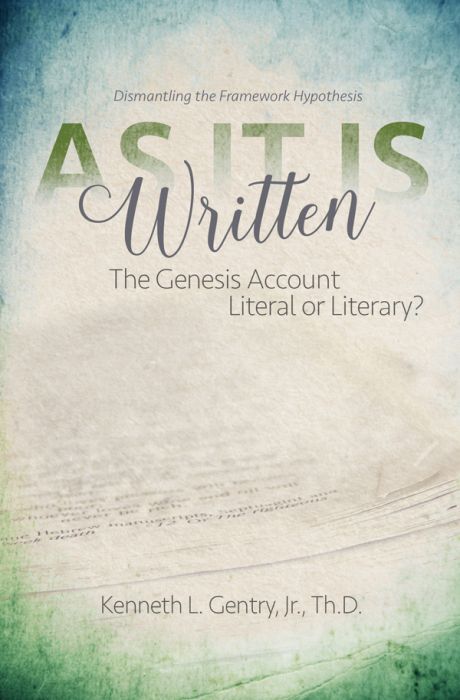 As it is Written
(Size: 1.4 MB)
Related Products
Check items to add to the cart or
Product Description

This book presents in a simple but clear presentation the basic argument for a six-day literal interpretation of Genesis 1. It also explains and rebuts the framework hypothesis, which is a leading view in evangelical academic circles. This book is aimed at intelligent laymen, though with the academic reader in mind, with definitions of technical terms where they are necessary and Greek and Hebrew words transliterated.

With this book, Dr. Gentry has thrown down the gauntlet, especially for evangelicals, including Reformed and Presbyterian churches. This challenge confronts those views of the Genesis creation account that choose for the literary against the literal, for poetic metaphor instead of historical sequence. The arguments are lawyer-like in their cumulative force, and prophetic in their call to listen to the Bible’s very text. The author has served us well with his clearheaded writing and broad-based defense of the traditional understanding of God’s creation of the world in six sequential 24-hour days.

Dr. Kenneth Gentry has taken a scholarly approach in dealing with the subject of creation as expressed in Genesis 1. This book, As It Is Written, is designed in particular to contrast the differences between the “Framework Hypothesis” interpretation of the Genesis account in light of a “Literal six, twenty-four hour Creationist” interpretation. Dr. Gentry masterfully explains the theories, concedes areas of agreement in order to rightfully present each view faithfully and establish the objectionable areas of conflict that are key to understanding Genesis 1. This polemic is designed to reject that system of interpretation which allows for reconstructing various texts to support alternative renderings of the Geneses account that rejecting a literal six day, twenty-four hour interpretation which is the historical orthodox view of Geneses, especially as maintained in the historical church based on the grammatico-historical method of interpretation. This book is a must-read by scholars, pastors, students, and laymen alike. If there is one book you need to read in a time when the literal interpretation of the Scripture, and in particular Geneses 1, has come under attack, this is that book!

As It Is Written: Dismantling the Framework Hypothesis is a book that helps guide readers across the debate between the traditional, six-day creation view, and the framework hypothesis or literary framework theory, which attempts to create a bridge between the Genesis account and modern secular science. Kenneth Gentry provides a detailed analysis and powerful refutation to the arguments in favor of the framework hypothesis, while clarifying the exegetical reasoning to defend the literal interpretation of these passages of Genesis. Clear, concise, and thought-provoking!