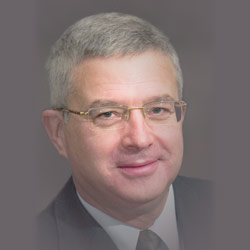 Dr. Andrew Snelling rejoined Answers in Genesis in mid-2007 as the organization’s Director of Research, as a research geologist, and also as a speaker for layperson and technical audiences. He also serves as Editor-in-Chief of the online Answers Research Journal.

Dr. Snelling completed a bachelor of science degree in applied geology at the University of New South Wales in Sydney, Australia, graduating with first class honors in 1975. His PhD in geology was awarded by the University of Sydney, Australia, in 1982 for his research thesis entitled “A Geochemical Study of the Koongarra Uranium Deposit, Northern Territory, Australia.” During his studies and afterward, Dr. Snelling worked for six years in the exploration and mining industries in Tasmania, New South Wales, Victoria, Western Australia, and the Northern Territory variously as a field, mine, and research geologist.

Andrew commenced in full-time creation ministry at the end of 1983, first working from Brisbane with the Creation Science Foundation of Australia (later Answers in Genesis Australia) until late 1998. From 1983 to 1992 Snelling was also still required to be a geological consultant to the Koongarra uranium project. He was involved in research projects with several CSIRO (Commonwealth Scientific and Industrial Organization) scientists, and in a major international collaborative research effort with ANSTO (Australian Nuclear Science and Technology Organization) and university scientists across Australia—and with scientists from the USA, Britain, Japan, Sweden, and the International Atomic Energy Agency, to investigate the Koongarra uranium deposit as a natural analog of a nuclear waste disposal site. As a result of these research endeavors, Andrew was involved in writing numerous scientific reports and scientific papers that were published in international science journals.

Andrew was founding editor in 1984, and served as editor for almost 15 years, of the Creation Ex Nihilo Technical Journal (now Journal of Creation). In late 1998 Andrew joined the Institute for Creation Research near San Diego, as a professor of geology. His responsibilities included teaching master’s level geology courses in ICR’s Graduate School; leading tours to the Grand Canyon, England, Yosemite, and Death Valley; and research and writing projects. Andrew was a principal investigator in the eight-year, ICR-led RATE (Radioisotopes and the Age of The Earth) research project, to which he made major contributions in rock dating studies using radioisotopes and in studies of radiation halos (radiohalos) and tracks (fission tracks) in various rocks and minerals.

He was a joint editor for the production of both RATE technical volumes, published in 2000 and 2005.  He was also the editor for the Proceedings of the Sixth International Conference on Creationism in 2008.  Then in late 2009 his two volume (1,100 pages) work, Earth’s Catastrophic Past: Geology, Creation and the Flood, the sequel to the Whitcomb and Morris The Genesis Flood classic, was published by the Institute for Creation Research.

Andrew’s talents and experiences have enabled him to be involved in extensive creationist research in Australia, the USA, Britain, New Zealand, and elsewhere, majoring on the radioactive methods for dating rocks and evidence for the Flood.

He has traveled around Australia, the USA, and widely overseas (Britain, New Zealand, South Africa, Canada, Korea, Indonesia, Hong Kong, China), speaking in schools, churches, colleges, and public and university meetings—to both lay and technical audiences—on the overwhelming scientific evidence consistent with the biblical account of Creation and the Genesis Flood, based largely on his own research.

Andrew and his wife Kym now reside in northern Kentucky, USA. They have three adult children and three grandchildren. One son and his family are serving in Taiwan with OMF International, another son is a pediatrician in Brisbane (Australia), and a daughter is serving in campus ministry with the Australian Fellowship of Evangelical Students on a Gold Coast (Australia) university campus.