The following titles are included: 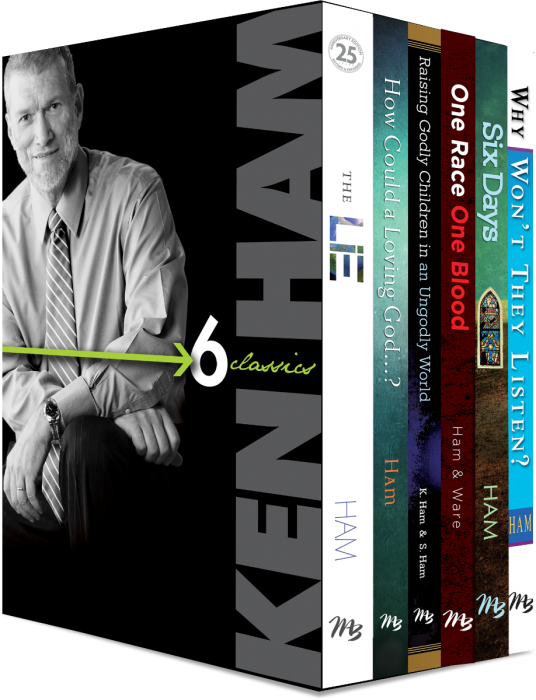 The following titles are included:

Why Won't They Listen?: Why is evangelism increasingly more difficult? Why is Christianity less and less appealing to unbelievers? What can the Church do differently to excel in fulfilling Jesus’ Great Commission? Ken Ham, world-renowned Christian apologist and creation scientist, is convinced that compromise with evolutionary worldviews has virtually crippled preaching and teaching efforts, especially in Western societies. The Bible’s foundational teaching of Genesis has been undermined as the unscientific theory of evolution is exalted as the ultimate authority. This has weakened the Church’s defense of the Bible and Its message of Jesus Christ as Savior.

How Could a Loving God: People assume Christians have all the answers; yet, in the face of tragedy, death, or suffering, everyone struggles to find just the right words to bring comfort or closure to those in need. Sometimes just hearing "It is God's will" isn't enough.

One Race / One Blood: It is a rarely discussed fact of history that the premise of Darwinian evolution has been deeply rooted in the worst racist ideology since its inception. Read a thorough account of the effects of evolution on the history of the United States and discrimination based on ethnicity, including slavery and the Civil rights movement.

Raising Godly Children in an Ungodly World: "As you take God's Word and apply its eternal principles to the everyday issues you face with your family, you will begin to create a godly heritage - a legacy that will impact that generations to come in ways you never dreamed possible." - Ken Ham

Six Days: The Age of the Earth and the Decline of the Church: Today, most Bible colleges, seminaries, K-12 Christian schools, and now even parts of the homeschool movement do not accept the first eleven chapters of Genesis as literal history. They try to fit the supposed billions of years into Genesis, and some teach evolution as fact. Our churches are largely following suit.

The Lie: Evolution (Revised): Revised & Expanded for this special 25th anniversary edition, Ken Ham once again takes the lead in pointing out the looming precipice too many church leaders are rushing towards: a denial of the full authority and accuracy of the Bible from its very first verse.

More Information
Reviews 2
Write Your Own Review
Only registered users can write reviews. Please Sign in or create an account