Equip your student to defend their faith through science! Life Science: Origins & Scientific Theory guides high school students through a comprehensive exploration of Darwin’s theory of evolution as they critically examine the viability, credibility, and plausibility of the theory. Students will explore the evidence, hear from scientists around the world, explore the fossil record, and examine two opposing views on the origin of life as they discover the unchanging truth of God’s word! 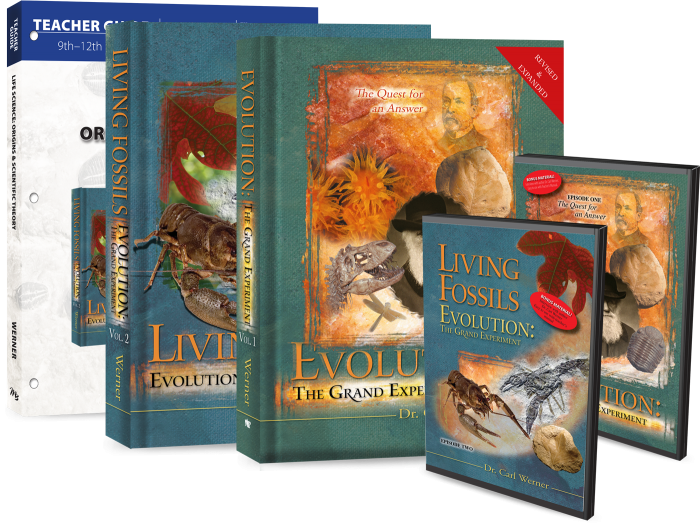 In Life Science: Origins & Scientific Theory, students will explore the theoretical aspects of evolution, allowing the evidence to speak for itself as they separate science from myth! Students will critically examine survival of the fittest, natural selection, similarities, mutations, adaption, and the fossil record as they:

Evidence that Demands a Verdict

In Evolution: The Grand Experiment Volumes 1 & 2, Dr. Carl Werner guides students through his personal 30 year challenge to prove evolution as he embarked on a worldwide journey to explore evidence, fossils, interview scholars and scientists, museum officials and more as he realized the more he learned, the more the truth of God’s Word became apparent.

Students will explore, assess, and examine both evolution and creation in order to develop their own understanding and conclusion on the origins of life.

Evolution: The Grand Experiment Vol. 1 challenges your student’s views on the origins of life through evidence that demands a verdict! Through interviews with scientists from leading universities and other institutions, balanced viewpoints, engaging text, scientific concepts, and more, students will separate science from myth as they investigate:

Evolution: The Grand Experiment Episode 1 DVD was filmed in 3 continents and seven countries over a 12-year period, the DVD series has highlights from 12 dig sites, 60 museums, and many universities and explores many misleading museum displays, science magazine articles, and television documentaries including "dinosaurs with feathers," "walking whales," "flying dinosaurs."

Investigate living fossils—organisms preserved in the fossil record that still exist in similar form today—to discover the challenges and mystery they post to evolutionary concepts! Through engaging text, hundreds of full-color photographs, quotes, and more students will explore past and present:

Additional Information
We Also Recommend
Reviews 18
Write Your Own Review
Only registered users can write reviews. Please Sign in or create an account