Excerpt from A Child’s Geography: Explore the Classical World 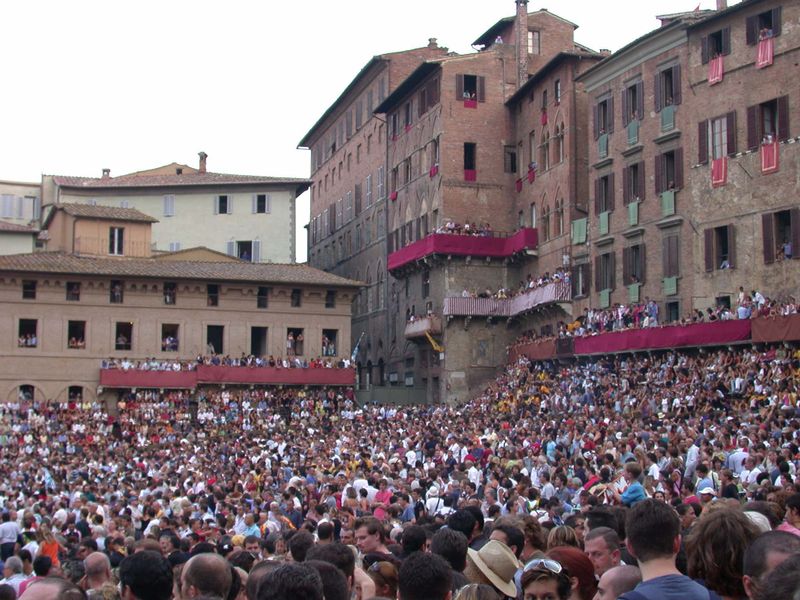 Here is the Piazza del Campo where the race will be held later today. This main square in Siena has been covered with several inches of dirt in preparation for the race. They have blocked off the circular track so that the enthusiastic spectators do not get trampled. Let’s find a good place where we can watch the race.

While the race itself lasts less than two minutes, the Palio is steeped in history and culture, a Sienese tradition that continues year-round. Ten horses will race, each representing one of ten contrade, or districts, within the city of Siena. There are seventeen contrade in total, but seven contrade will have to wait to be represented in a future race. During the year, the jockeys are trained and ten horses are randomly selected and assigned to the town districts. The night before the race, each contrada, or district, holds a feast for its neighbors, which is celebrated on the streets of town. Then, on the morning of the event, each horse is taken to a church in its contrada to be blessed.

Before the actual race, once the piazza is packed with thousands of spectators and sealed off, the festivities begin with a colorful parade, complete with mounted police wielding swords and flag wavers dressed in medieval costumes. The flags [the Italian word for flag is palio] represent the 17 contrade of the city. As the colorful banners pass by the crowd, the loyal and excited spectators cheer loudly for their contrada.

Get ready; the race is about to begin! Another blast from the gun and they are off. Ten horses charge around the piazza, navigating sharp turns, the jostling of the other horses and the pressing in of the screaming crowds. The shouts and excitement of their fans drive the horses and riders to even greater, more reckless speeds. Which contrada will win this time—the Dragon, the Tortoise, the Shell, the She-Wolf, the Owl, the Snail, the Goose, the Panther, the Unicorn, the Caterpillar, the Porcupine, the Eagle, the Giraffe, the Ram, the Wave, the Tower, or the Forest? For more sights and sounds of the Palio di Siena, watch here: