The Dinah Harris Mystery series is now available as a four book set. In these Christian fiction thrillers, author Julie Cave, tackles the uncomfortable issues of the creation versus evolution debate, eugenics, domestic violence and hypocrisy in the church with unflinching honesty. Cave’s central character, Dinah Harris, is an ex –FBI agent who deals with the real-world problems of alcoholism, depression, grief and more. With stories you might easily hear on tonight’s news, Cave leads the reader to recall the authority of the Bible and our God of redemption. 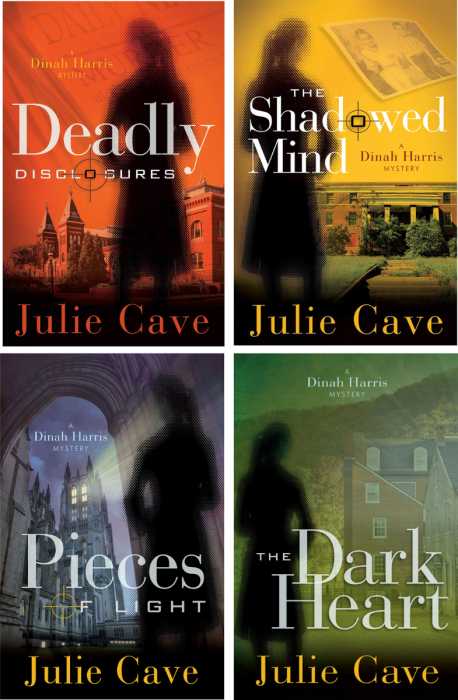 Deadly Disclosures
FBI agent Dinah Harris now has a missing person's file to go along with a bad case of alcohol abuse and the depression she cannot seem to shake. Fighting to keep her focus, she struggles to find answers for why Thomas Whitfield, the prominent Secretary of the Smithsonian has vanished from his office with foul play almost guaranteed. Whitfield's body is eventually found, and Dinah is drawn into a frightening conspiracy, as more people begin to die, and Whitfield's faith is revealed as part of the motive behind his murder. Dinah finds troubling answers in an academic world filled with powerful financial endowments and a virulent opposition to the faith Whitfield only recently found. Can she reveal the truth before she finds herself the next silenced victim of a ruthless, unseen enemy?

The Shadowed Mind
A suspense-filled mystery which answers an ominous question: Who will be found worthy to live; who is the next victim? After the deadly investigation into the Smithsonian murders, Dinah Harris is now facing a daily battle to keep her sobriety while struggling to form a new career from the ashes of her former job as an FBI agent. From the shadows will emerge a cunning and terrifying killer, who carefully and methodically will decide whose life has value to society and whose does not. Using her profiling and security skills as a private consultant based in Washington, DC, Dinah uncovers a connection to the shadowy world of neo-eugenics, and those who publicly denounce the killings but privately support a much different view. Against this backdrop, Dinah must come to terms with her own past, as those associated with the deepening mystery face their own personal demons, and struggle with the concept of God's inexhaustible grace and forgiveness. Old secrets are revealed, tragedies unearthed, and the devastating legacy of science without compassion is finally brought to light. The second in a powerful new fiction trilogy!

Pieces of Light
Detective Dinah Harris hunts down a serial bomber targeting religious icons and buildings. The bomber is on a mission to rid the city of religion and establish a 'new world order'. Can someone so intent on ridding the world of God experience redemption? What lies behind his hatred of God? Will his darkened soul search for pieces of light?

The Dark Heart
Is there a past too awful for even God to forgive? The Dinah Harris mystery series continues....Angus Whitehall’s past never really died....it just stubbornly waited for vengeance. A killer has settled into his small rural community, and no one suspects that the local pastor knows much more than he can say. Crippled by the devastating choices of his youth, Angus watches as those he led astray are methodically punished by someone from their violent, racist past. Unable to forgive himself, now the secrets he has kept are slowly poisoning the family whom he dearly loves. As the devastating consequences of his silence are revealed, former FBI agent Dinah Harris must step outside of the lonely isolation that cocoons her, before she can trap a killer and find peace with herself in the depths of God’s mercy.

More Information
Reviews 7
Write Your Own Review
Only registered users can write reviews. Please Sign in or create an account